Heat preservation bag has five advantages: one, save a lot of plastic bags, support environmental protection; two, clean and sanitary, insulation bag itself waterproof and oil protection, all the materials use environmental protection material, wear resistance and wrinkle resistance super strong; three, good heat preservation effect, when out of food out, is still hot air Teng, from the color and taste of food can reach. To the ideal effect. So work food problems can be easily solved, the opportunity to go out picnic can also increase a lot; four, heat insulation bag itself is low price, and can be used many times, the general market can be purchased, five, can be used for the hotel’s takeout, and can also print personalities to promote popularity. The thermal insulation bags are designed for motorcycles, bicycles and cars for motorcycles, bicycles and cars. They are designed by sports knapsack, bag, professional gift and product package bag, and leisure shopping bag for thermal insulation bag. The thermal insulation bag is developing more professionally, and it can bring the most affordable service for people’s life. 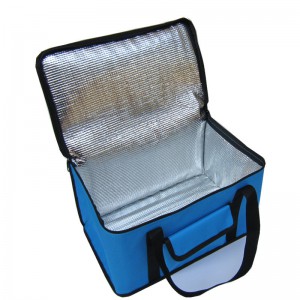 The laminated foil bag is made of nylon or PET/PE/AL films, and is widely used in high speed production for flexible packaging ;

Laminated foil is made of Nylon or PET/PE/AL films. It is widely used in high speed production for flexible packaging because of its advantages for as a quick solution for increasing efficiency.

The laminated aluminium foil roll is resistant to water and many chemical components. Combining materials on the foil makes it opaque and therefore, protects sensitive products from light. It also has benefits such as being a good oxygen barrier, fine forming properties, and that it can maintain the freshness of the product for a long period.

OPP is a biaxially oriented polypropylene film, which is a film made of polypropylene as a main raw material and biaxially stretched by a flat film method. It has high tensile strength, high rigidity, good transparency, and good glossiness. , Low electrostatic performance, excellent printing performance and coating adhesion, excellent water vapor and barrier properties, so it is widely used in various packaging industries.
Second, OPP varieties
OPP film can be divided into many types depending on the application, such as OPP ordinary optical film, OPP heat sealing film, OPP cigarette packaging film, OPP pearlescent film, OPP porcelain white film, OPP metallized film and OPP matting film.
Third, OPP use
If further subdivision, ordinary optical film can be divided into color printing film, bag-making film, tape film, paper-plastic composite film and plastic braided composite film and coating film. Heat-sealing film can be divided into ordinary heat sealing and low-temperature heat sealing two kinds. Cigarette packaging films can also be divided into high-rigidity, high-shrinkage, ultra-low-temperature cigarette packaging films.
In short, according to market demand, through the adjustment of raw materials and formulas, to meet the needs of users as much as possible.
OPP has an annual production capacity of 5.55 million tons, which is an important category in the plastics industry. Each woven bag factory needs to understand the performance of OPP and master all kinds of production technologies in order to exert the tremendous power of polypropylene raw materials.

(1) 10-year Insulation Materials Manufacture Experiences
(2) More Than 500 Employees
(3) Quick and Safe Delivery
(4) Experienced Service Team
(5) 24 hours On Line Customer Service
(6) Free OEM and ODM Services offered
(7) Distribution Channel in More Than 60 Countries
(8) Full range products for choice
(9) Competitive Price, Best performance, High Good Quality
Quality Control:
100% of the lamps will be tested and keep lighting for 24 hours to test its quality reliability, and we will also test its temperature after 24 hours’ lighting.
Then after it is cool we again test 100% of the lamps to see if it still work well. Each lamp should pass all these QC procedures before shipping to customer.